One simple reason why people dismiss or ignore the urgency of the unfolding impact of climate change, peaking of fossil fuels, and depletion of highly concentrated mineral resources is because they do not fully appreciate the dynamics of exponential growth.

In the 1970s, Professor Al Bartlett realised that many college and university students did not have an intuitive grasp of exponential growth and its implications for the future of humanity. Far too many students were unable to provide correct answers to the following two questions:

There is also the story of the peasant who, when asked by a Sultan what gift he desired in return for saving the life of his daughter, replied that all he desired was to be paid in grains of wheat, but with one condition. On the first day he should be paid one grain of wheat and for each day hence until all the squares on the Sultan's chess board had been marked off for each day, he should receive double the number of grains of the previous day. The puzzled Sultan agreed to these terms and complied with the condition of the gift. How soon afterwards did the Sultan request the peasant to choose an alternative gift?

Professor Al Bartlett subsequently devoted a great deal of time and energy over several decades educating students and the general public as to the true significance and implications of exponential growth. 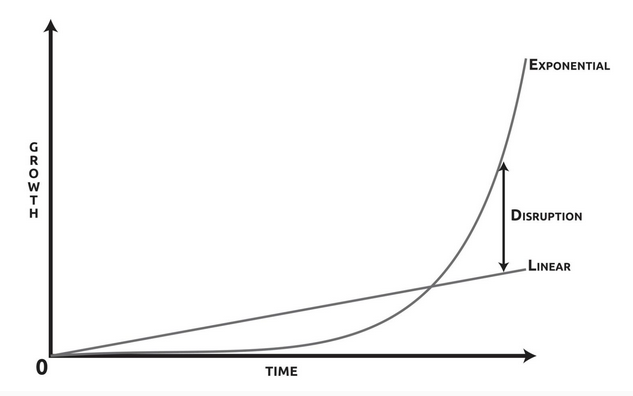 The time for concern about the potential exhaustion of a resource comes when no more than about 10% of the total has been used up.

Exponential growth occurs when any entity grows by the same percentage over successive time intervals.

Linear growth occurs when any entity grows by the same amount over each successive time interval.

The number of units that are extracted over each doubling time can be listed as follows:

The doubling time of any entity undergoing continuous exponential growth is the time it takes for that entity to double in size.

The approximate doubling time in years is given by dividing 72 by the annual rate of exponential growth. For example, an economy which grows by 3% per year has a doubling time of 24 years.

Many economists, politicians, and CEOs promote an annual 3% growth rate in the GDP of an economy without fully understanding the physical consequences of such a target. Consider a culture of cancer cells starting with a single cell which grows and divides only once per day. At the end of one day, the culture has grown to two cancer cells. The doubling period is one day. Given enough nutrients, the culture would grow to over one billion cancer cells (1,048,576) after 20 days. On the 19th day the culture size would have been a bit more than half a billion (523,288).

The time for action to counter cancer growth would have been much earlier. Cancer cells left unchecked with sufficient nutrients for growth eventually die with its host. Nothing on our planet Earth grows forever due to limits of resources on a finite planet. The only thing which can increase in size for ever, at least hypothetically, is our human construct of money. Money serves as a medium of exchange, a store of value, and a claim on current and future resources, a claim supported by our institutions. Existing physical resources do not grow in parallel with growth in claims on resources. Unchecked growth in claims on resources simply hastens the exhaustion of resources. The resources left remaining for future generations are less concentrated and hence more energy intensive to mine.

What more we can learn from the properties of exponential growth? Given steady exponential growth in the extraction of resources, the absolute size of the stock of any resource has very little effect on the time it takes to exhaust the resource. If the original resource were twice as large, it would take only one more doubling time to exhaust the resource.

Delays in action are critical when exponential growth is involved. This applies to both population, energy, and other resources, including ecosystems. William Ophuls warned us back in 1977 that the time for concern about the potential exhaustion of a resource comes when no more than about 10% of the total has been used up. This warning has been ignored.