The standard of living in under developed nations is substantially lower than that in developed nations. There is an ethical issue here. If growth in material consumption were to cease in all nations, then under developed nations would be locked into a lower standard of living. There is undeniable empirical evidence of increasing global and national inequality. The share of the pie for the poor has substantially declined over the last 30 years. As of 2014, the top 1% of income accounts for 10% of the total income in advanced economies (Piketty, 2014). In the United States the top 10% has an income of close to nine times that of the bottom 10%.

Inequality is more dramatic when the wealth of the rich and poor are compared. Wealth is defined as the net worth of assets in the form of property and real assets less liabilities. In 2017, the richest top 1% of the world population owned 50% of global wealth (Credit Suisse, 2018). Economic growth has improved standards of living, but has also resulted in greater inequality. On ethical grounds, material consumption per-capita should be shared equally between nations and within nations. Higher standards of living tend to be accompanied by lower total fertility. If the rich nations were to assist the poor nations to raise their standard of living, then the world population would grow more slowly on its path to Zero Population Growth

The mushroom graphic in Figure 1 shows the disproportionate consumption by the wealthy. In 2015, the richest 10% of people in the world, and that includes New Zealanders, were responsible for 49% of CO2 emissions, while the poorest 50% of people in the world were responsible for only around 10% of total lifestyle consumption emissions. An immediate 50% reduction in emissions by the richest 10% in the world would have reduced global CO2 emissions to 75% of levels in 2015. A 75% reduction would have reduced global emissions to 62.5% of levels in 2015.

In 2019, the top 10% by income group in the United States emitted almost 8 times as much tonnes of CO2e per capita than the bottom 50%.

Social inequalities within countries in previous years were, on average, lower across the globe than they are today.

North America and Europe combined were responsible for almost 50% of all historical greenhouse gas compared to 11% for China.

If historical responsibilities were taken into account, then many high-income nations would have no carbon budget left.

INEQUALITIES IN CONSUMPTION AND GREENHOUSE GAS EMISSIONS BETWEEN COUNTRIES

The extent of Inequalities in consumption and emissions of greenhouse gas equivalents (CO2e) between countries is shown in Figure 2 below. 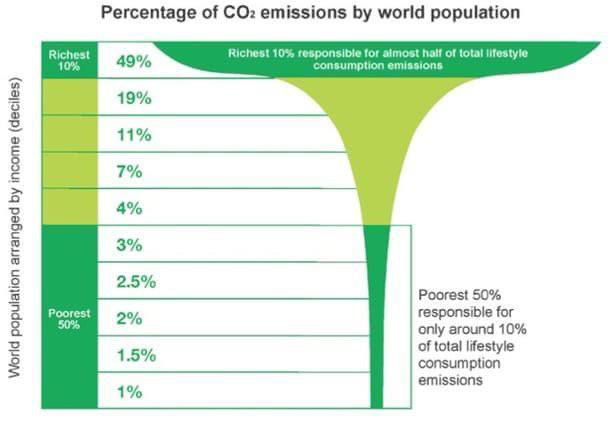 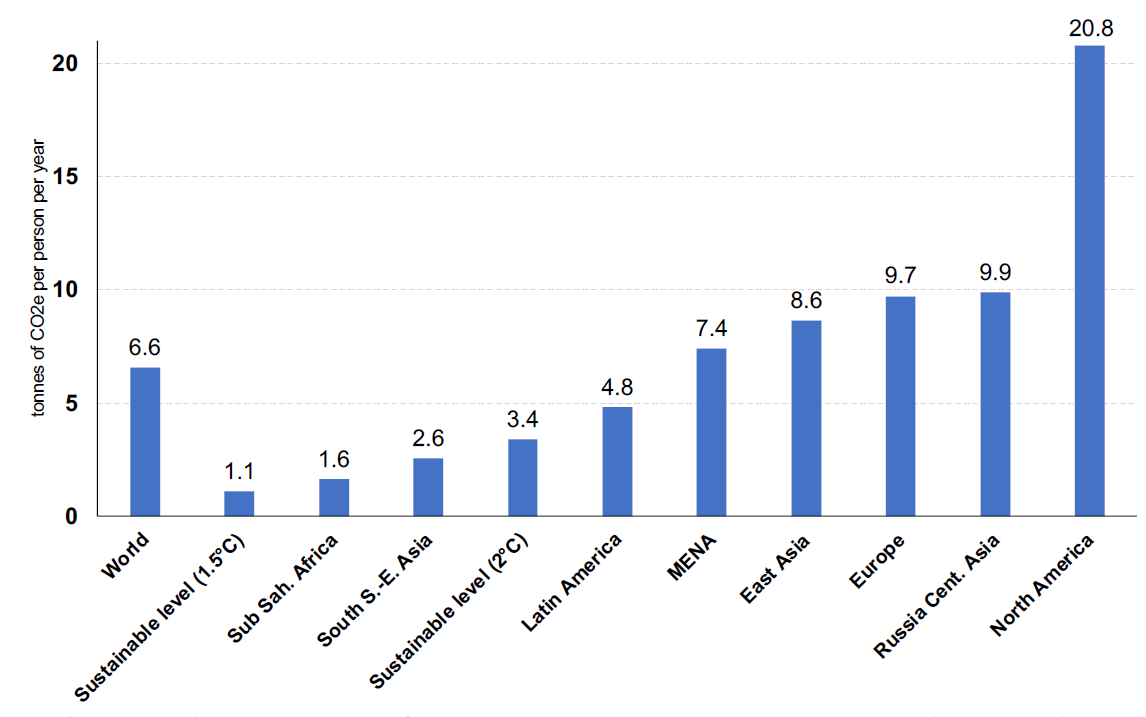 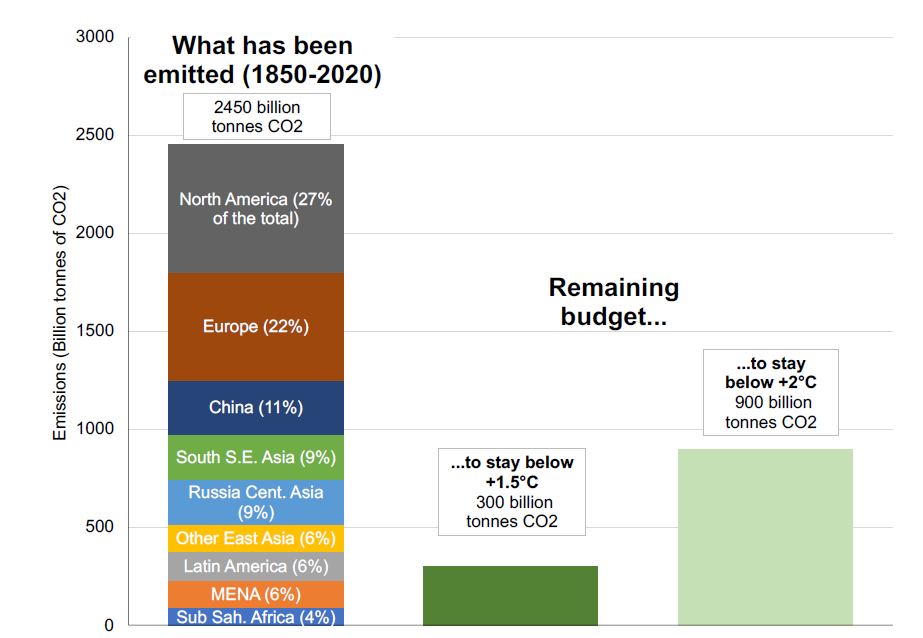 INEQUALITY BETWEEN INDIVIDUALS AT THE WORLD LEVEL

Figure 4 shows the inequality of carbon emissions between individuals at the world level. 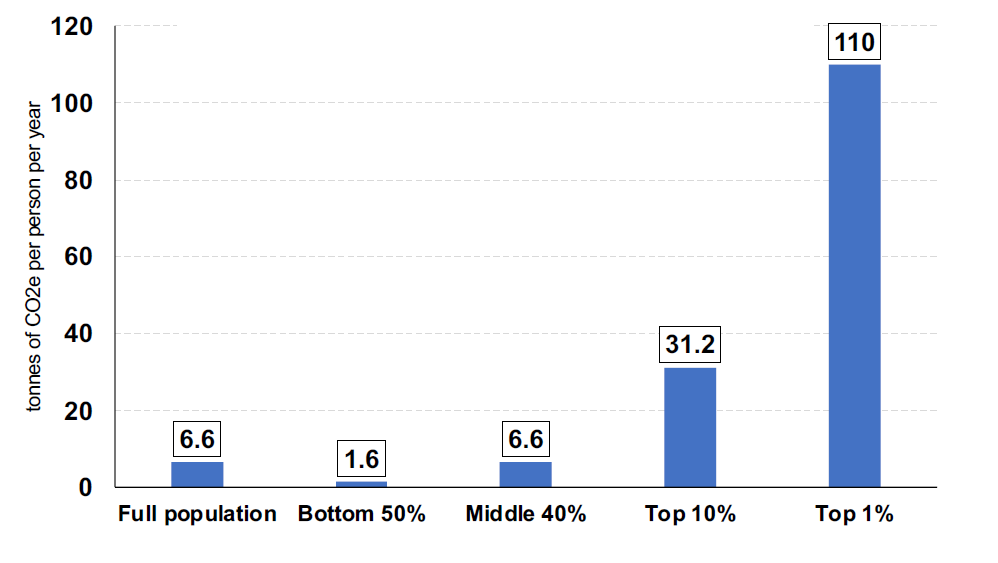 INEQUALITY OF CONSUMPTION AND GREENHOUSE EMISSIONS WITHIN NATIONS

Inequality also exists within nations. Figure 5 shows per capita emissions by income group in the United States as an example. 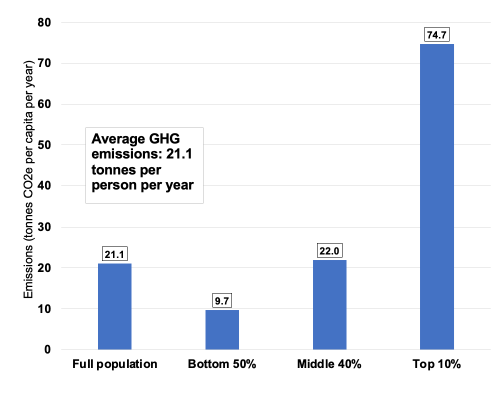 Figure 5: Emissions inequality and per capita emissions in the US 2019 (Chancel 2021)

The Gini index measures the extent to which the distribution of income or consumption expenditure among individuals or households within an economy deviates from a perfectly equal distribution. A Gini index of 0 represents perfect equality, while an index of 100 implies perfect inequality. Figure 6 shows the increase in household inequality in New Zealand from 1982 to 2016 using the Gini index. 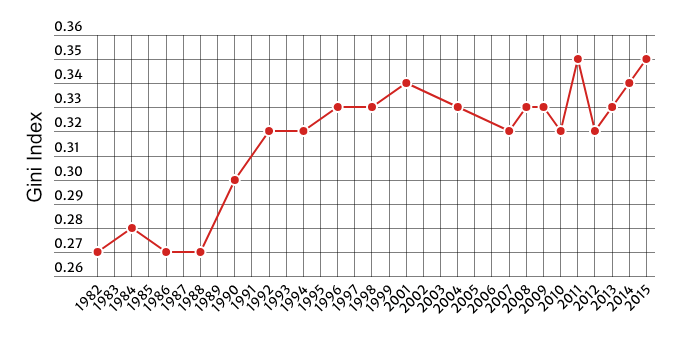 Global carbon inequalities are mainly due to inequality within countries.

Figure 7 shows global carbon inequality between countries and within countries from 1990 to 2019.

Figure 7: Global carbon inequality between countries and within countries 1990 to 2019 (Chancel 2021)

The vertical Y-axis show the percentage of global inequality using the Theil index which is used to measure economic inequality. The Theil index measures a distance away from the ideal egalitarian state of everyone having the same income. Greater levels of inequality are indicated by higher percentages of the Theil index. In 1990, most global carbon inequality (63%) was due to differences between countries.

Inequality between countries still exists, but there are now even greater inequalities within countries which have serious ramifications if we are to have any success in mitigating the impact of climate change.

Carbon emission pledges made at the 2015 Paris Agreement are typically expressed in aggregate emissions percentage reductions from a base year. These pledges can be expressed in terms of emissions per capita at a certain time to make better sense of what they imply. These targets do not represent what must be done in order to keep emissions below 1.5 or 2°C. Official commitments do not add up to meeting the 2°C objective, much less to meeting the 1.5°C target.

All actions to reduce our greenhouse gas emissions involve reductions in

consumption. Those on low incomes have less ability to further reduce their carbon footprints than those on higher incomes.

The United States pledge amounts to a 53% reduction by 2030 of its 2019 per capita emissions. This equates to an average target emission of 3.0 tonnes of CO2e per capita by 2030.

Figure 8 shows an example of necessary reductions in consumption and emissions of CO2e by income group to stay within this target. 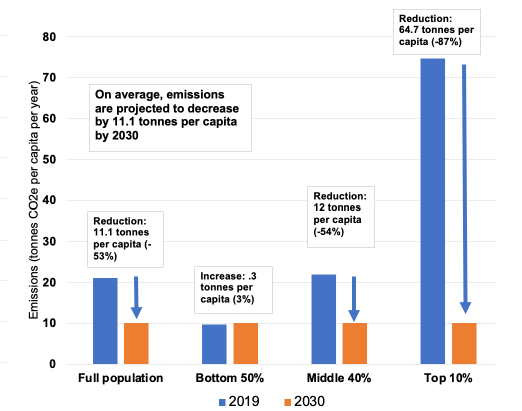 The bottom half of the population in the United States is already 3% below the target.

The bottom 50% of other rich countries are already below a 2030 target of 3.0 tonnes of CO2e per capita, or close to it.

Oxfam in The Guardian 2 December 2015 https://www.theguardian.com/environment/2015/dec/02/worlds-richest-10-produce-half-of-global-carbon-emissions-says-oxfam